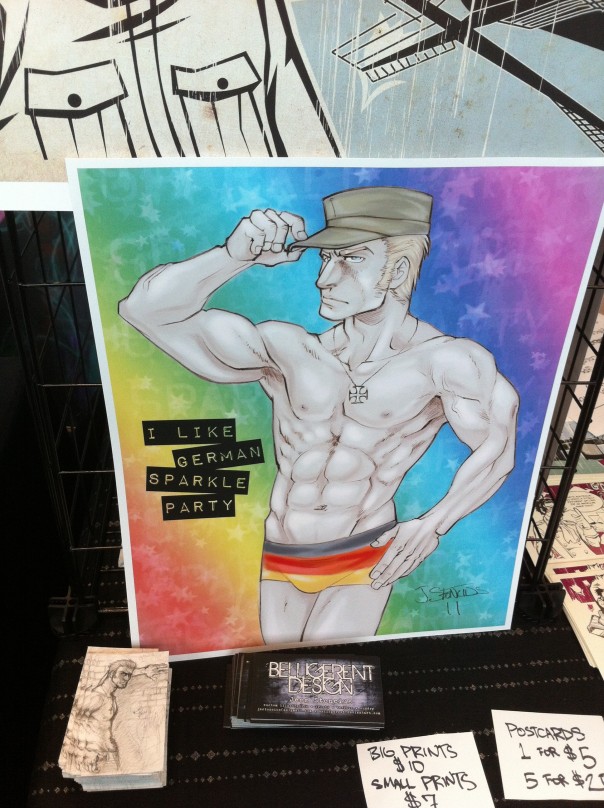 It’s been 3 years since my last comic con back in 2008 and this was my wife’s first comic con ever. I got all my gaming out at E3 so it wasn’t really on my agenda this time around, which was fine since the lines to play games were obnoxiously long. Street Fighter x Tekken was there, Mass Effect 3, Kinect games, Sonic Generations, all stuff that’s been seen already. They did have The Missing Link DLC expansion for Deus Ex: Human Revolution available, which is the only thing I regret not getting a chance to play. It’s coming out this month for $15.

Didn’t really do any “work” today so I don’t have much to report on and I didn’t really take pictures of much. This was strictly a relaxation trip. As much as one can relax surrounded by herds of mouth breathing people, having your feet stomped on, and sucking in the fumes of sweaty human meat. Basically we went there to spend some money, and spend money we did! Monica (my wife) got a vintage Ewok doll from 1984, a Walking Dead lunch box and wrist band, a Kirby hat and sticker. 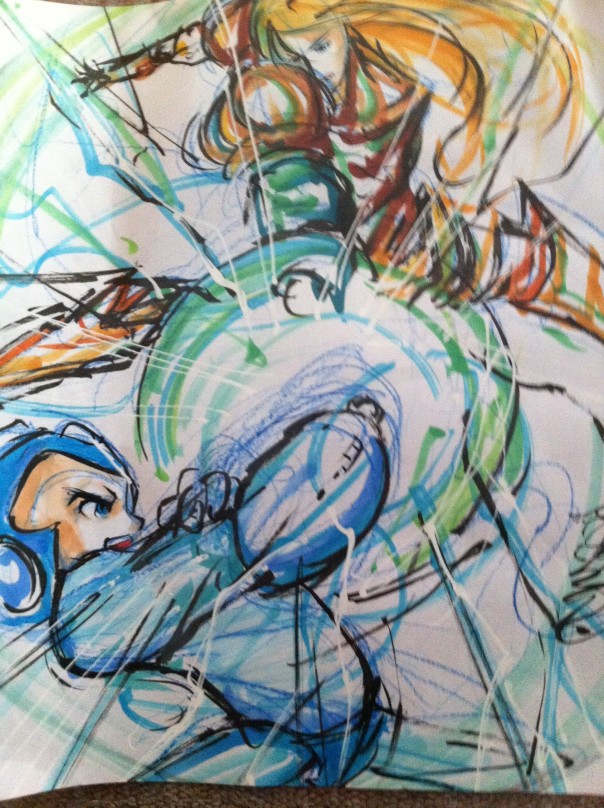 We also commissioned two personal works of art. I always wanted to know who would win in an arm cannon duel between Samus and Mega Man, so I got a picture of the duel in progress. I’m always impressed watching artists draw, especially since I have no artistic talent myself, and double especially since he drew this in like 10 minutes. 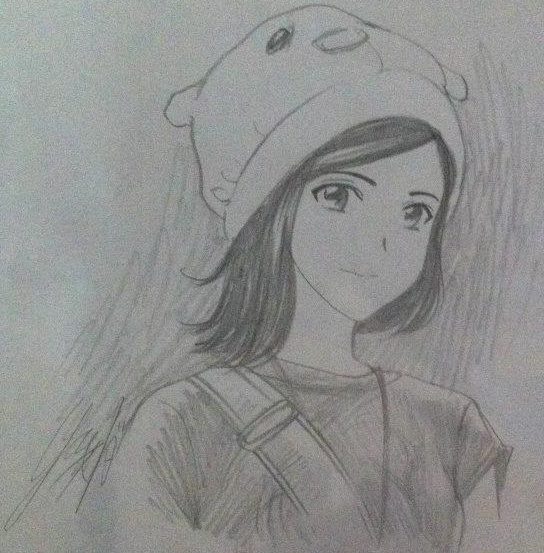 The other is this anime rendition of Monica. It’s perfect. Click on either picture to link to the artist’s website. 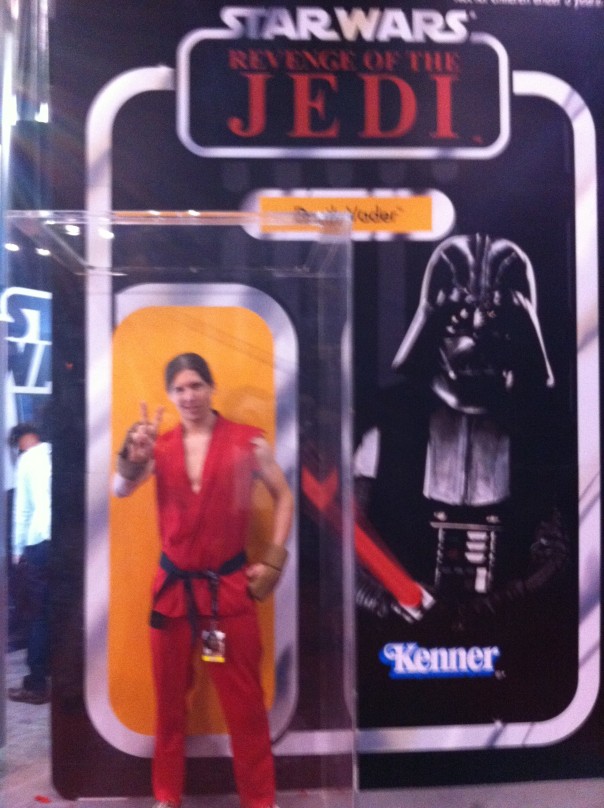 There’s always a downside going to any con dressed up, aside from the obvious self-degradation . Yes that’s me dressed up as Ken Masters from Street Fighter. Anyway, you’re bound to have dozens of people stop you to take a picture, not that I mind having pictures taken. I’m not deluded about this, I know that merely by dressing up I’m drawing attention to myself, and I feel there’s a whole psycho-analytical argument to be made here about why people want to be noticed, but I digress. Sometimes you get like 10 pictures in a row, one right after another, and yeah it’s an act of flattery, but it interferes with your own enjoyment. I was only there for this one day and I wanted to see as much as I could!  Sometimes it’s nice to go sans costume just for that reason. I lost Monica for a bit when she walked off during what could only be described as an impromptu photo shoot. Aside from the mass of people, the carpets just happened to be red and she said I got lost in the color blending.  Although most cosplayers tended to either be Spider-Man, Deadpool, or from Naruto, I did run into a Ryu and Akuma so of course we had to fight to the death. I’m still alive so clearly I won. 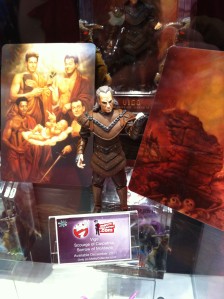 The only things I really stopped to take time to look at were a few Gundam toys, a couple video game retail booths which really didn’t have anything special,  and a bunch of awesome new Ghostbusters figures. These figures bear the real likeness of the actors and I believe thats a first for the Ghostbusters. Viggo, the Scourge of Carpathia, the Sorrow of Moldavia, stood out in particular. Did also get to see the Transformers Universe. MMO + Transformers = a great idea but I’m so never going to play another MMO again. I’ve outgrown the idea of paying $15 a month to essentially accomplish nothing and have nothing to show for it in the end. The Old Republic doesn’t count by the way because it’s made by Bioware and will at have a real immersive, character-driven narrative. So I count that as a single player RPG that also just happens to be online.

Got to hang out for a bit with my friend Michael Goodman, better known to some as InvaderBacca, who does some interesting visuals in the 8-bit genre. If you google InvaderBacca, you’ll most likely come across an assortment of art, photos, 8-bit music, and show dates.
I’d love to be there for the whole weekend but tomorrow, Oct 15 is the gaming marathon and then Sunday I’ll be more than likely passed out all day. Don’t forget to join me online tomorrow on XBOX Live, especially if you’d like a Street Fighter IV challenge.