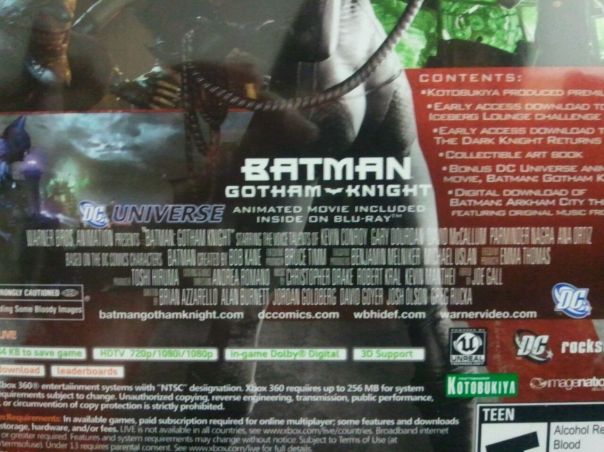 For those of you who haven’t spotted it already, look just below Catwoman’s ass.

This is the back of the box for the Batman: Arkham City XBOX 360 Collector’s Edition. Why is this an error? Because it says it comes with an animated movie on blu-ray. I thought to myself, “How odd that the 360 would come with a blu-ray movie.” But it doesn’t. There’s really a DVD inside. This may be a minor error, but an error nonetheless. Didn’t they learn anything from the IGN logo copy and paste fiasco from the Okami Wii release?

Does this affect anyone? Is this a major life changing event? Is someone getting fired for this? Probably not and it’s all completely irrelevant. But it’s fun to point out someones irreversible publicized blunders.

If you still don’t see it, click on the image for a larger picture.