E3 has been over for more than a week now and everyone’s probably all talked out about it already, but I feel I owe Nintendo an apology.  I said some mean things about them and I don’t want anyones feelings hurt. If it sounded like I was bashing Nintendo in my other post about E3, I kind of was, but they needed it.  For those of you who may remember, Nintendo used to have the “Official Seal of Quality” stamped onto its games. If you look at them now, the word “quality”  is disturbingly absent. I have nothing against Nintendo as a company, I just really feel that their decision to reveal the Wii U, which to me seemed overly underwhelming, should have waited until they had their lineup of initial games a bit more flushed out. The Nintendo console market for the past few years and seemingly for years to come has been devoid of quality.  All that aside, their 3DS lineup completely makes up for any other of their shortcomings. Pretty much every 1st party Nintendo title coming out is a must have.

Starting with the most obvious, the king of all platformers will be making his obligatory appearance on the 3DS coming this holiday with a title cleverly named, Super Mario 3DS. It’s hard not to like these games. From what I played, it’s like a combination of Mario 64 and Super Mario 3 from the NES era, music blocks, tanooki suit, and all.

Mario Kart would be my other top pick. Always been a favorite of mine since the original on SNES and I haven’t missed a single one since.  If I had to choose, I’d say the N64 version was my favorite, but that looks like it  might change when this one comes out.  There weren’t many options to try out since it was still just an early demo, but it’s obvious that it will be a solid title when it’s complete. The best new aspect is definitely going to be customizing your karts.  You can swap the body of the kart, the wheels, and various add-ons. On the demo they only had this hang glider attachment available, but I’m sure there will be more.

Other excellent titles to play were Star Fox 64 3D, which uses the interior camera to share a live feed of your facial expressions with your opponents during multiplayer. Kid Icarus Uprising, which also has excellent multiplayer. Up to 6 people can fight in a deathmatch-like scenario. Each side has a certain amount of lives and when the last one is lost, one player becomes Pit and then the goal is ultimately to kill Pit. Didn’t get a chance to play the single player mode though. Luigi’s Mansion 2 I was rather impressed with considering I never cared for the first one, but Luigi is my favorite of the brothers so I gave this game a shot and it holds up on its own against the other big contenders.

I’m glad to see Capcom is putting a good amount of support into this new system. With the launch release of Super Street Fighter IV as snare for me to buy the system, they’re now throwing not one, but two Resident Evil games with one due out later on this month. 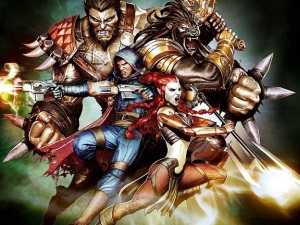 Metal Gear Solid: Snake Eater will find a new home on the 3DS. It’s Metal Gear in 3D, I feel nothing more needs to be said to stir excitement. Square Enix had a Diabloesque dungeon hack for show, Heroes of Ruin which is as good as purchased as far as I’m concerned. Four different playable classes with all the standard upgrades and loot hoarding. Best of all, it’s multiplayer. The two downsides so far are that the 3D seemed somewhat lackluster and other is that it’s not coming out until next year. Now if they could only make Final Fantasy good again. Lastly, one of my favorites, the under appreciated Ace Combat series will be finding its way onto the console but also probably not until next year. Ace Combat is so good! Why doesn’t anyone else see this? Ace Combat 6 with the flightstick…. granted the $150 price tag may have been a bit much for most gamers but it was so worth it. I know Ace Combat will never give Call of Duty a run for its money, but I’d like to see the new one coming out for PS3 and 360 at least be considered a viable alternative for online gaming. But that’s a discussion for another time.

The handheld market is generally reserved for more casual titles, but it looks like the DS will be getting a hot beef injection of hardcore games. Clearly a good move as far as I’m concerned, now if they would only do likewise for the Wii. I have hope. Despite what I said about the Wii U, if the line up for the 3DS is any indication of what Nintendo has in store for its home console future, I have hope… Nintendo, I just want to say that even though we may fight sometimes, I still love you. And when you’re ready to give the Wii some serious games again, I’ll be waiting there for you with arms wide open.

These will be my final thoughts on E3. Sorry it’s been so Nintendo-centric, but you never forget your first love no matter how hard you try.

Please feel free to leave any comments/suggestions/ideas/yell at me.  A like on facebook would be awesome! Check back in a couple days, I’ve got quite a gem of a game planned to review.