This game is finally coming out! Yes this information has been available for a few months now and yes, that was the only picture I could find for it.  If you never heard of River City Ransom 1, that’s because it was originally released on the NES in 1989, and then nothing for 15 years until a remake came out for the Game Boy Advance in 2004. I can’t possibly imagine the game didn’t do well. Or maybe I can, it was way ahead of it’s time. The world simply wasn’t ready for a game of this magnitude yet. It was a brawler that incorporated RPG elements. In 1989, brawlers had only just begun to take a serious foothold with games like Golden Axe and Final Fight and RPGs still weren’t widely accepted, so the combination of the two was nearly unheard of. The Scott Pilgrim game out now on XBLA and PSN is pretty much a spiritual copy, and owes its entire existence to River City Ransom. It took them over 20 years to even attempt to duplicate the magnum opus that is River City Ransom, but here, soon, 22 years later, we are finally getting a true sequel. And when I say we, I really mean Japan. The Wii Virtual Console will see this game some time this summer, with a PC release later on. However, the rest of the world might not see this game until 2012.

In the meantime, let’s take a look at a few points real quick on how River City Ransom revolutionized the brawler genre.

Although the Kunio-Kun series, to which River City Ransom is part of, is popular in Japan, we’ve had a very limited reception of their titles here in the States.  We did get somewhat recently, River City Soccer Hooligans on DS, which I recommend even if you don’t like soccer. No! Especially if you don’t like soccer. We never got the hockey one though, which makes no sense to me because America holds far more hockey fans than it does soccer fans. A couple years ago I found out they turned River City Ransom into an MMO, but much to my chagrin, it’s only available in Japan. I was FURIOUS when I couldn’t find a way to play it, and believe me, I tried for days. But basically you either need to live in japan to play or you’re S.O.L. 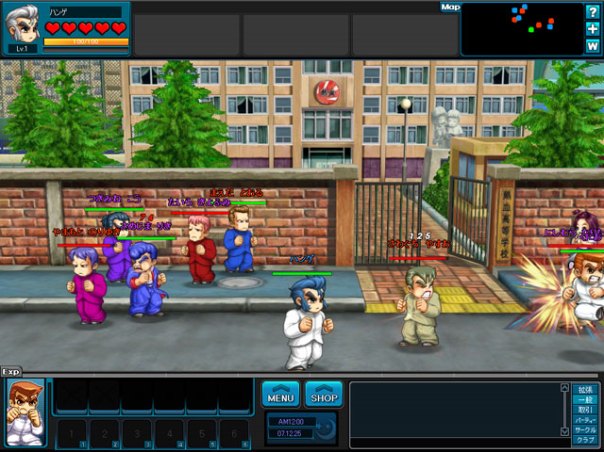 River City Ransom has some of my favorite music on the NES. The soundtrack stays in constant rotation on my playlist. Year200X, a video game tribute band, does an excellent metal version of the River City Ransom boss music.

and get a sauna for just $3.50? The answer is none. So River City Ransom 2 better deliver.

There is no homepage that I can find for this game yet, which further worries me about its release schedule. Believe me though, I shall remain vigilant. Oh! Also, if anyone finds a way to play the MMO, TELL ME IMMEDIATELY!!!

Feel free to drop me a line, leave some comments, like this page. And don’t forget to share this link!

Posted in Not Reviews